There is a land spread along the banks of Hậu River, with the image of a shy Muslim girl behind a Khanh Ma-om scarf, with a roar that captivates many travelers. This land has given musician Trần Tiến the inspiration to compose earnest and loving lyrics:

(In English:
I love Mat'ra scarf
Softly on your forehead
I love the song Atidza
As vast as ocean waves
I love the morning flower
Falls lightly on your shirt)

An Giang currently has 9 muslim villages , with about 5 thousands households, more than 17,000 people; mainly concentrated in Tân Châu town and An Phú district. Most of them are muslims.

Muslim villages are concentratedly distributed along banks of Hậu River with very typical wooden houses. There are some wooden houses that are hundreds of years old , that are very delicately designed according to large and airy spaces with nature. The house will be divided into two types: small house with 4 compartments and large house with 5 compartments. According to feng shui, the front of house always faces to the south and there must be a wooden ladder to go up and down. The two doors are slightly lower than the head so that when strangers enter the house, they must bow low to greet the owner. Depending on the conditions of each family, the type of wood used to build the house will show the class of the owner. In the house, there are not table and chair, but when guests come to the house, the host often spreads a mat or a rug for the guests to sit cross-legged on the wooden floor. Especially in the house, there is a door frame with an eye-catching curtain to separate it from the inner house. According to custom, this is a living area completely reserved for women and girls, men are not allowed to enter. Therefore, this area is very important when there are guests or people coming to the house. 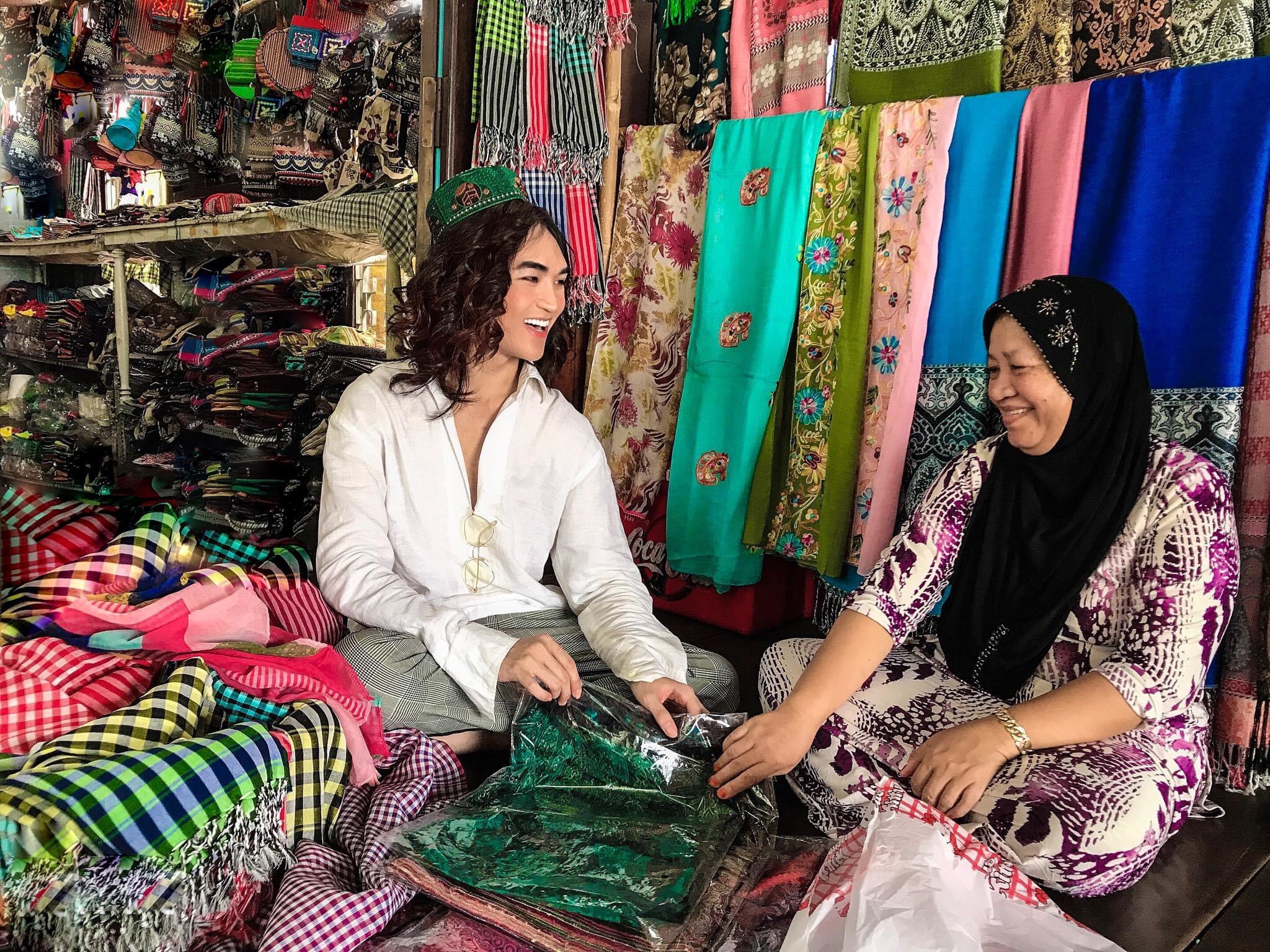 Coming to Muslim village, visitors cannot miss the outstanding cathedrals with dome architecture, this is the place of religious and cultural activities of the Cham people.

The most prominent among them is the Mubarak mosque. From Châu Giang ferry, you turn left to admire the beauty of this construction. Mubarak Cathedral - a sanctuary in beliefs, cultural activities of the Muslim people according to Islam belief. The cathedral has a unique architecture, a round tower, an arc-shaped main gate, very unique. The roof of the mosque has a large two-story oval tower, the base of the tower has the shape of a crescent moon and a star, symbolizing Islam. This is one of the works of value, and is an attractive destnation in Châu Giang Muslism village. If you visit Đa Phước Muslim village, you should visit Masjid Al Ehsan Mosque and Sunna Mosque , these are two unique architectural works, built and restored very spaciously. 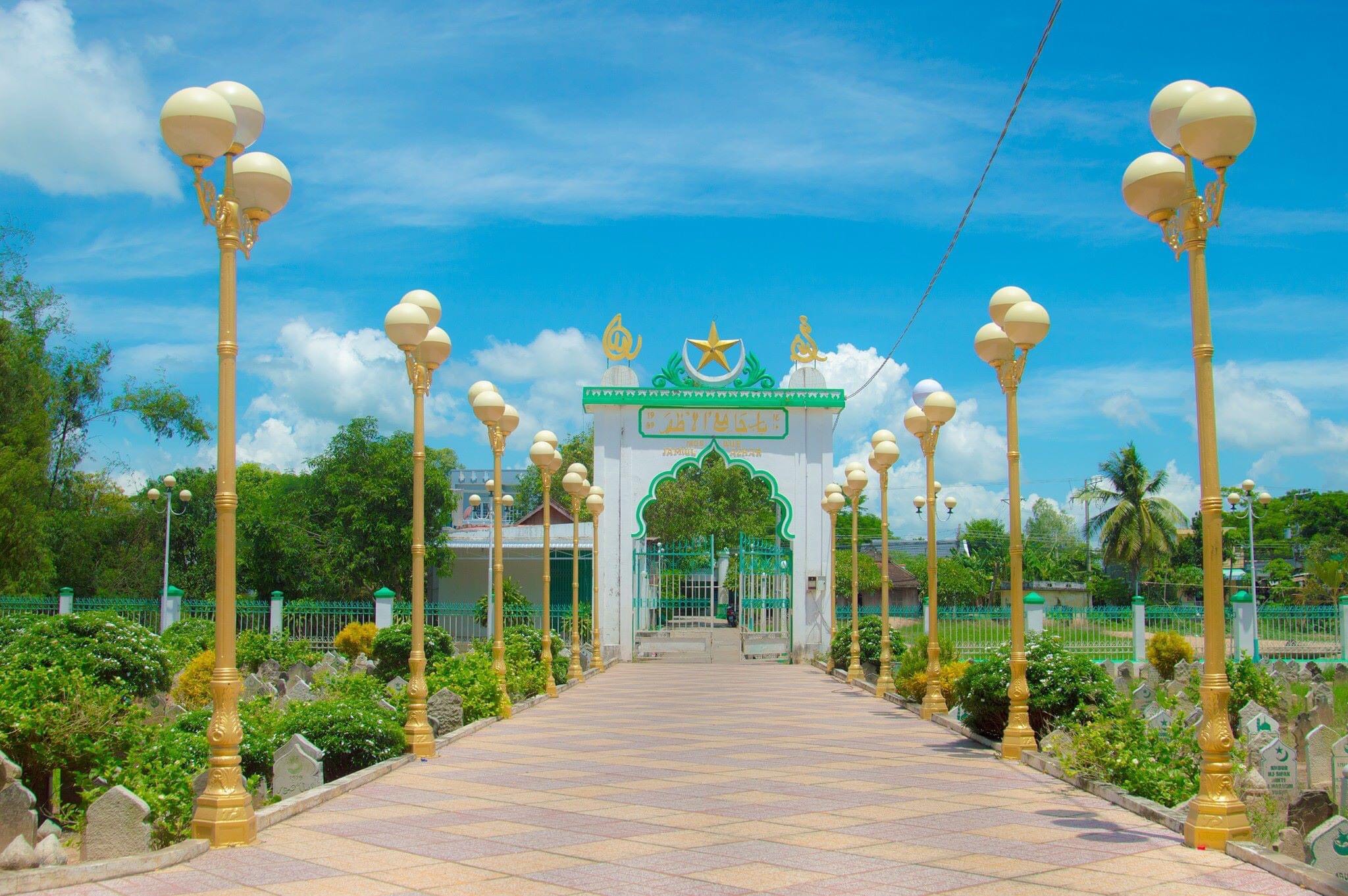 There are no painting, sculpture or any god in the mosque but only the Koran. Muslims believe that what is written by God in the Koran will become reality and they must follow the teachings.

Every year, the Muslims people of An Giang have 3 big festivals, Roja on December 10 of the Islamic calendar, Ramadam festival, also known as a fasting ceremony lasting from September 1 to the end of September 30 of the Islamic calendar, and the birthday of Muhammed on March 12 of the Islamic calendar. During the month of Ramadan, relatives, wherever they go to work, must return to their hometown to perform religious rituals, all Muslism people, including boys and girls from 15 yearole and older, must practice fasting and reduce hard workings. The time of fasting from sunrise to sunset, after that, everyone can eat and drink normally.

70 days ater the end of Ramadan, the Muslims people are on the Roja festival, also known as Haij, which is the traditional New Year's festival to celebrate the new year. At mosque, people gather to celebrate after a year of hard working. This is also the time when the cultural and spiritual life activities of the Muslims people in An Giang are most exciting. They sing, dance, dress cultural performances.

Another typical cultural feature of Muslims people in An Giang is the costume. Men wear a cloth hat, and women wear a Matra scarf, also known as Khanh Ma-om scarf. The image of a  Muslims girl with traditional clothes on the loom not only shows the cultural identity of the nation, but also a unique and charming highlight of Muslims women in An Giang. 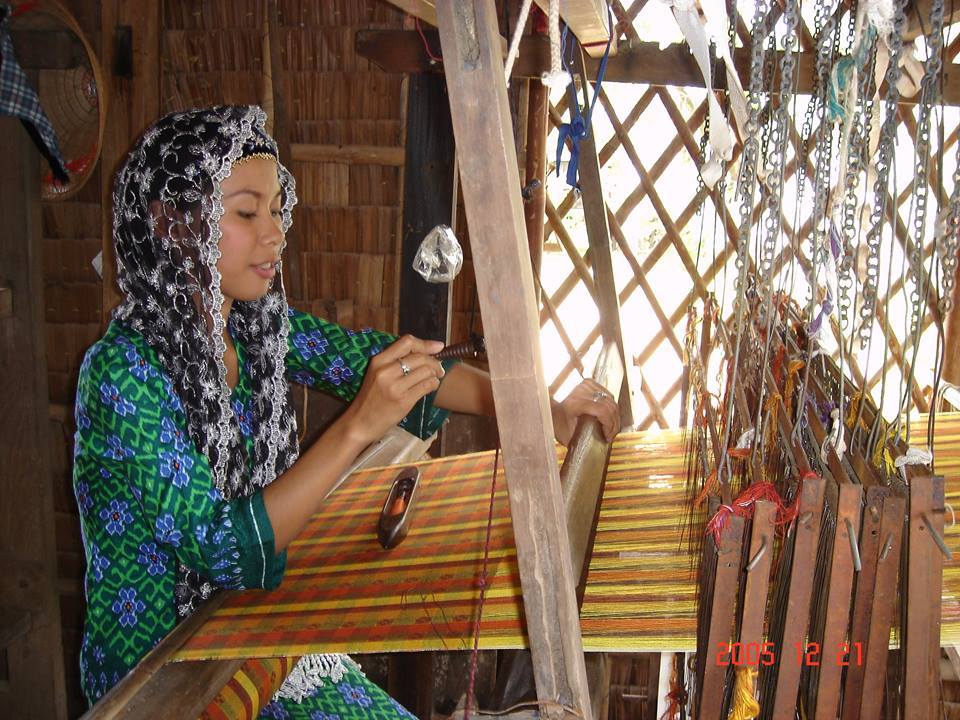 Muslims people are also known as "masters" of brocade weaving, which are famous thanks to their sewing, knitting, embroidery and beading products on traditional Muslim women's costumes. Products always attract customers because of their beauty. When visiting  Muslims village, don't forget to buy brocade products as bags and scarves that are hand-made by the local people.

Today, mosques with impressive artistic architecture, typical culture in daily life and traditional brocade weaving of Muslims people in An Giang attract a large number of tourists in Việt Nam and around the world to visit, study and explore. Therefore, a part of the Muslims people quickly embraced the trend, participate in tourism activities to introduce their unique cultural values.

If you have the opportunity to visit An Giang, stop by the gentle Muslims village, which still preserves a lot of traditional culture and practices after the event of hundreds of years of history. Shy Muslims girls behind Khanh Ma-om scarf  will be unforgettable picture to travelers comback again. 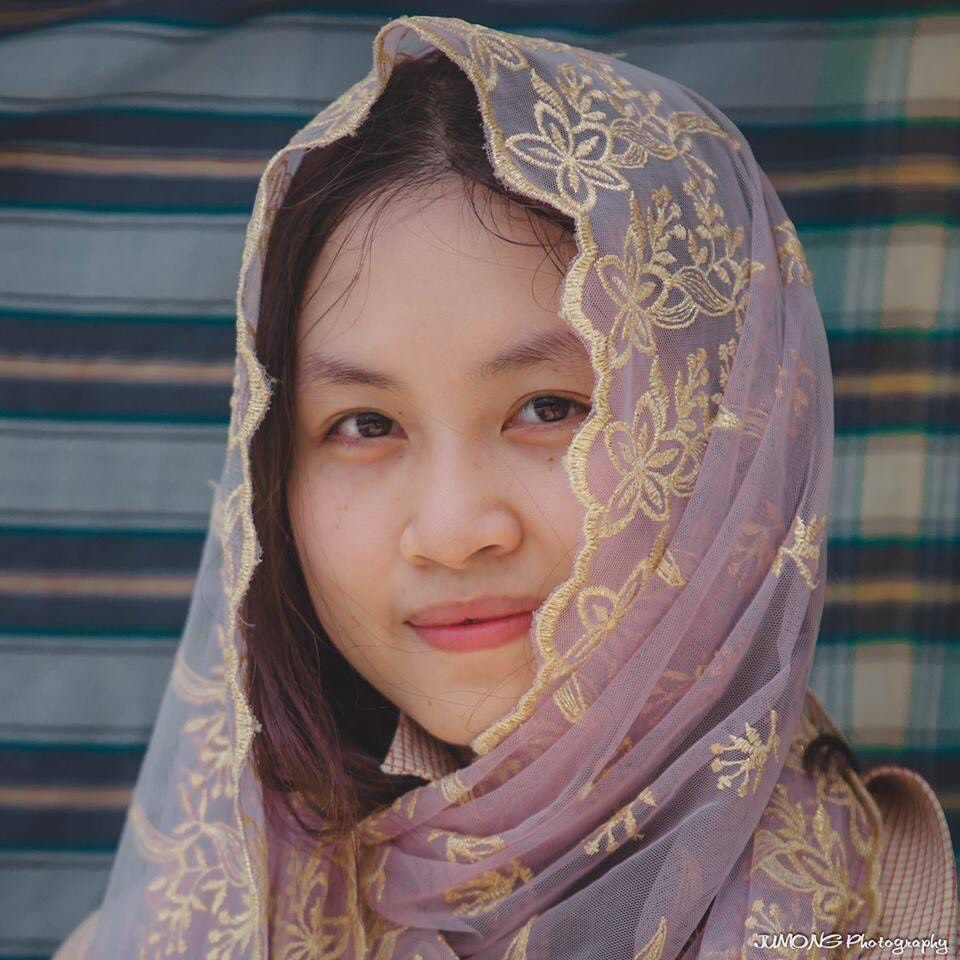 How to move to Châu Giang Muslims village?

To move to Châu Giang Muslims village, you can choose one of these two methods.

The first one is traveling by road. From the Châu Giang ferry station, that is about 3km from the center of Châu Đốc city, you will wait for the ferry to cross river to Châu Phong commune of Tân Châu district. Then, you turn left and go more than 1km to Châu Giang Muslims village.

The second one is travelling by boat, you can rent a boat at the station in Lê Lợi street. Boat rental prices are different depending on where your trip is and how many people. However, one thing that you can be assured of is that the price is relatively cheap and very reasonable. This is the most popular and favorite way choiced by tourists. If you go by boat, you can visit Châu Đốc fish-rafting village.

How to move to Đa Phước Muslims village?

From Châu Đốc, you can rent a boat at a small boat station near the Victoria hotel. Boat rental prices are different depending on where your trip is and how many people. On the way, you can visit Châu Đốc fish-rafting village. 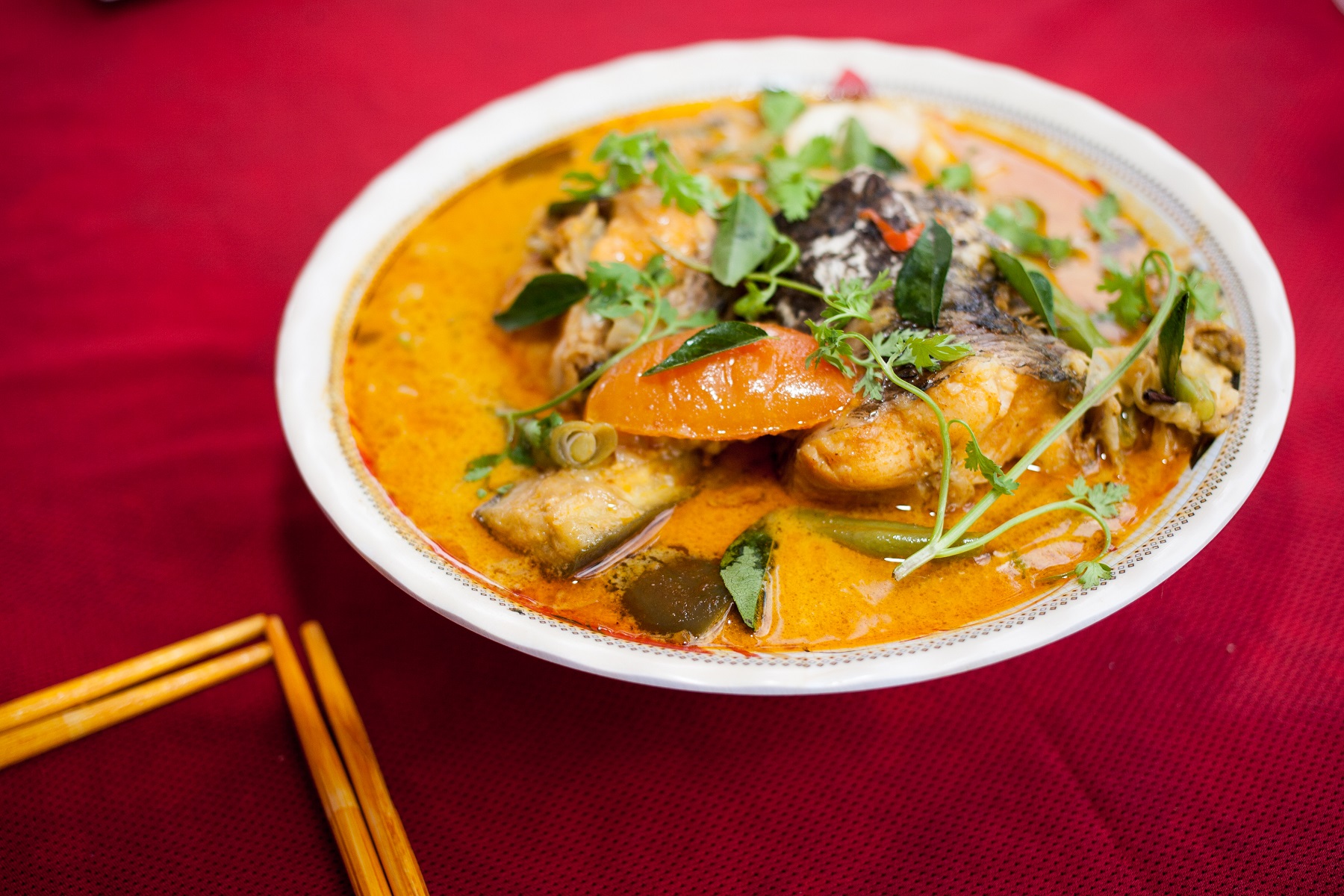 “Cơm nị” and “cà púa” are two famous traditional dishes of Muslims people in An Giang. These two dishes are a harmonious combination, complementing each other. The cooking is relatively sophisticated, unique and quite strange for both Vietnamese and international tourists. In general, “cà púa” is not much different from curry but “cà púa” is full of meat without potatoes, vegetables or any other materials cooked with, and “cà púa” is especially extremely fatty and extremely spicy. 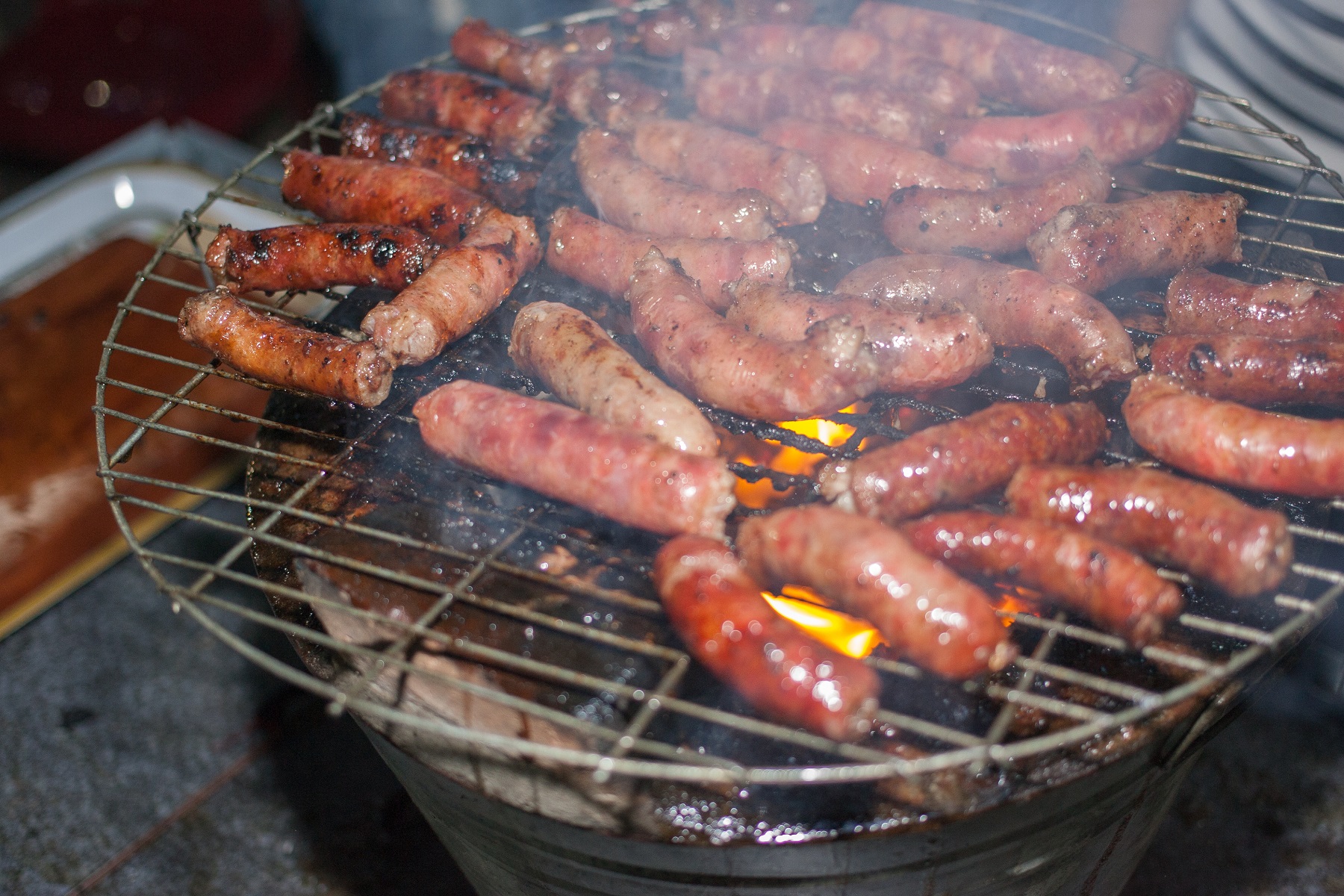 “Tum Lo Mo” means beef sausage. Tum Lo Mo is made from fresh beef. Beef are finely chopped and marinated with some types of esoteric spices, including cold rice, wine, ginger .... So, the taste is very different from the sausage of Vietnamese, Chinese and Khmer. Walking around Muslims village, visitors will see an attractive red sausage drying rack. Tum lo mo can be grilled or fried, served with vegetables,chili sauce or salt with pepper and lemon.

Cham people have other dishes, such as curry goat, beef, sheep, chicken and fish, ... these meats do not need to be fried before cooking like the Vietnamese cooking style, they cook according to the Indian cooking style, with lots of hot peppers and coconut milk.

“Cơm bò” (Rice with beef) is a breakfast of Muslims, that is favorite dish of not only local people but also tourists to An Giang. There were a journalist and his friend who traveled to An Giang and described the beef rice dish as follows: “ The most impressive thing is the piece of un-marinated beef. Its color is pink and red. Before grilling, the fresh meat is applied a little oil. At first, the fire was jubilant. When the two sides of the meat were just dried, the meat are quickly cut  into small pieces, about the length of an adult's arm. Then, lower the fire. When they took the meat out on a plate, the middle of meat was still pale peachy pink. The piece of meat is soft, sweet and bold."

Besides, the Muslims also has a lot of sweet cake that you must visit Musliam village many times to enjoy all of them, such as: gante, ha-Pay-chal is fried oil, when frying dough twisted together like a bird's nest; “hanaguh”; "ha-pay-k'gah" cake; “ha-pai-nung”; "nam-parang", nam-ken ... are often made on holidays.

The dishes of the Muslims people in An Giang are created on the basis of a harmonious combination of locally available ingredients, such as: beef, palm sugar of the Khmer, the fatty taste of coconut, and the bold taste of spices (onion, pepper, black pepper, chili, lemongrass). In addition, the ingenuity of Muslims women has created unique traditional dishes, which not only have a very eye-catching form but also have an unforgettable taste. It can be said that the taste is the attraction for tourists to come and come back to Muslism village.